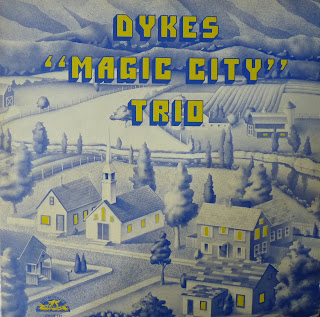 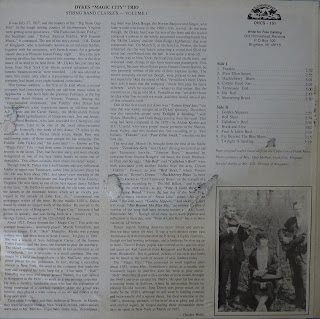 Here's a lp that compiles all the 78rpm records by Dykes "Magic City" Trio, an old-time square dance band of the 1920's. The band was in fact a trio with in his center the appalachian fiddler John Dykes. The guitar player was Hubert Mahaffey and the autoharp player, Myrtle Vermillion (a cousin of Sara Carter). The trio came from the Virginia region and recorded two sessions in the 1920's, thanks to Dock Boggs, who introduced them to the record company. Their records apparently had some success in their time but the band did not record again.
All their music is dance oriented, due to the driving sound of John Dykes's fiddling, one of the best mountain fiddler recorded in the 1920's but they recorded also a few "murder" ballads (Frankie, Poor Helen Smith) and two religious numbers.
-Be sure to read the liner notes to learn more about them (sorry for the bad shape but you can manage to read)
DOWNLOAD HERE
Publié par Gadaya à l'adresse 7:06 AM 6 comments: