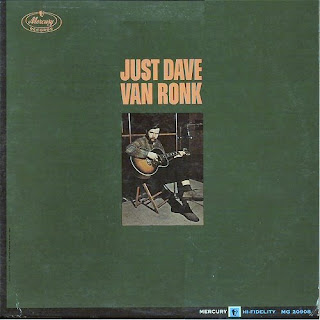 Here's an lp from 1964 by the great folk/blues singer Dave Van Ronk. A major figure in the New-York folk scene of the early sixties and an inspiration for the young Bob Dylan, Van Ronk remained somewhat an outsider all his life and never gained popular success. A Singer with a strong voice, and a fine fingerpicking guitarist, he was one of the few white man who could sing the Blues with real passion and authenticity. New-Orleans jazz was his first musical love and he was the first one to play ragtime pieces on the guitar. During 40 years he stayed true to his music and beliefs, and his autobiography, "The mayor of Mac Dougall", that he wrote with the help of Elijah Wald just before his death, is the finest and funniest portrait of Greenwich Village and the folk scene of the sixties ever written.
Track list:
1.Candyman
2.Frankie's Blues
3.Bad dream Blues
4.Pastures of plenty
5.Didn't it rain
6.Wanderin'
7.God Bless The Child
8.Blue Monday
9.Baby let me lay it on you
10.House of the rising sun
DOWNLOAD HERE
Publié par Gadaya à l'adresse 1:27 AM

thank you for your post,but the link does not work

I know, i will upload this somewhere else soon

this was posted at the lost-in-tyme blog a while back. the link is still active but tracks 7 and 8 have some excess noise.

actually there's another link from Merlin in Rags. Just wanted to save you the trouble of re-uploading.

Thank you Pirate. I didn't know this one was already out on the blogsphere (in fact i didn't check before)

You have a great music blog here! I've added you to my mp3blog list and custom search, check it out.

Rickdog's collected 6,000 mp3blog links, accessible from the alpha menu at page top. You can open frames on these blogs to view them directly on my site, and you can also view the feeds in a frame.

You can search your blog and all the others in my custom google search:

I add new blogs to the alpha lists once a week, but your site is immediately added to the custom google search engine.

Merlin in Rags is a password-protected blog, as is the referenced link, therefore of no help to those not in the know. The posted link does work, so don’t hesitate to try it. I listened to two tracks: Candyman and House of the Rising Sun. Candyman sounds good, but I heard only the left channel of House. The LP wasn’t the most pristine source but it was fun to hear those tracks again after many, many years. Thanks/Merci.

Works for me. Thanks! I have the vinyl album somewhere but no usb turntable. Great to listen to this album again after so many years!

Thanks for telling me about the book!It's great fun!Here's what i made from reading it:
http://zenrunningorder.org/index.php?option=com_zeromix&task=ViewMix&Itemid=9&mixID=2589