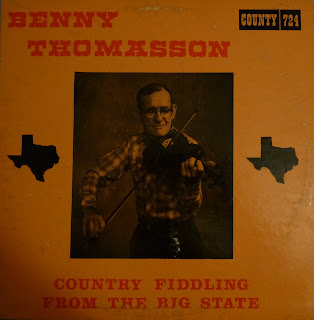 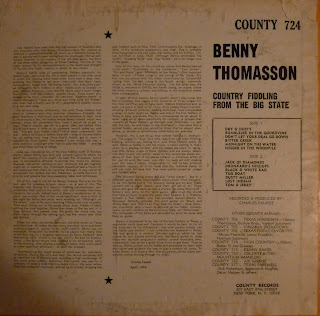 We continue this week with fiddle music, this time from Texas, with one of the best fiddler from the Big State, Benny Thomasson. Texas fiddle music is a bit more sophisticated than in the rest of the South, with longer bow strokes, variations and the influence of Fiddlers Contests and popular music. This will eventually give birth to a genre of music called Western Swing in the 1930's and Benny was an adept fiddler in this style too but on this lp he plays mostly old-time fiddle tunes (it contains maybe the most beautiful rendition of the haunting "Midnight on the water"), with a few rags in between. He learned the old-time tunes at a very eary age with his father Luke and his uncle Ed, both excellent fiddlers and soon was competiting and winning many a fiddle contest with his own variations on the old tunes. He did record commercialy in 1929 but the two sides were never released by Okeh. Rediscovered in the 1970's, he recorded and participated in many fiddlers contests and many young fiddlers learned from him, and was remembered not only for his skills on the instrument but also for his generous and warm personnality.
-Go here to read a article about Texas Fiddle and Benny's music
DOWNLOAD HERE
Publié par Gadaya à l'adresse 7:34 AM