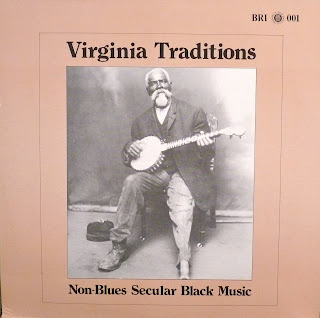 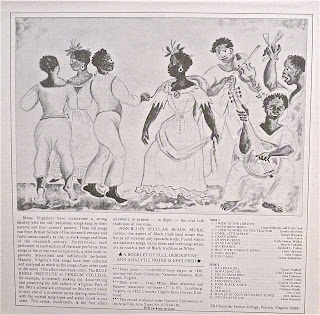 This record comes from a collection published by The Blue Ridge Institute documenting the folk music of the Virginia State. This one focalize on the kind of folk and dance music black virginians played in rural areas, before Blues became so popular that it eclipsed other kind of secular music. To listen to non-Blues material played by blacks during the 20th century, we must turn to field recordings as very few examples were recorded by phonograph companies. We must be thankful to people like the Lomaxes for example, who recorded a lot in the South for more than 30 years and brought back some outstanding performances. (See especially the collections "Black Appalachia" on Rounder or "Black banjo songsters" on Folkways)
On this record, you'll hear banjos, fiddles, guitars, accordeon, harmonica played by a bunch of players recorded mostly in the 1970's by Kip Lornell and some recorded in the 1930's by John and Alan Lomax. If you want to hear more performances by these players, you should go to The Digital Library of Appalachia, a goldmine of wonderful recordings of appalachian music.
Update: A reader told me that this record is avalaible in cd format or digitally through Itunes. I really appreciate the work of the record company who made avalaible this collection again (Global Village) so I strongly recommend that you buy a copy for yourself. I just offer you the booklet in pdf format...
DOWNLOAD HERE (pdf document of the booklet)
Publié par Gadaya à l'adresse 5:40 AM

Great record, picked this one up a while ago, great to see it available here.

Thanks for this; I'm not too crazy on black music, since it's usually too bluesy, and I have a hard time with some white blues singers, too - minus Dock Boggs et al.

Off topic aside, I love hearing African-American hoedown music, and this looks like a great LP for it. Thanks for posting it!

This is a fantastic collection. Thank you very much! I enjoyed the book too.

This is just the type of thing i have been searching for recently. I have been waiting for a new black banjo songsters compilation from cece conway that, according to some fine folks discussing such things on the banjo hangout forum, should be coming out soon. Apparently their will be a couple tracks from Josh Thomas. This is the best I could have hoped for in the meantime and possibly better than what i am looking forward to. Thank You.

kegan,
you are "not too crazy on black music"?
that's really a really bold comment. what
sort of music do you listen to? "black
music" is where rock and roll came from
and has had a huge impact on old time music
being that the banjo is from africa. Also,
what the heck is African-American hoedown
music? I think you should delve deeper
into "black music" if you like Dock Boggs.

I've been such a regular here for so long that I feel like saying that I've been *attending to* your blog :)

And this is just to say thank you - I'm much obliged, man, much obliged. Please do keep up the good work.

From my testing of your uploads it seems that all comes with an identical _MACOSX folder, however, most of them can be deleted. That is not the case with the Jean Ritchie LP Record:

All those folders (including the original Jean Ritchie folder) have to be deleted with the program Unlocker, because it can't be moved in any other way.
They are corrupted in some way or another and are rendered almost unusable. Since this is no single problem with only one computer I hope you in the meantime can delete the faulty file and, if you so wish, upload another.