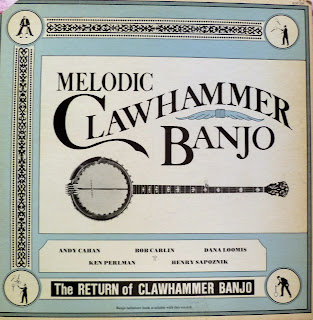 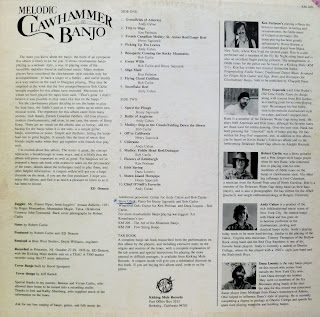 Here's a mid-seventies out-of-print lp issued by Kicking Mule devoted to a then, new genre of clawhammer banjo, the melodic style. Since the folk revival of the 50's/60's there were two major schools of clawhammer banjo in the US. One, initiated by Pete Seeger, was mostly an adaptation of the older techniques of down-picking suited to accompany all kind of folk songs and the other was the traditional way of accompany the fiddler for Southern instrumental dance tunes. In the 1970's in New-York, a few players worked out a solo style of clawhammer where the banjo would play the complete melody of a tune whitout loosing the rhyhtmic drive of the instrument. Their repertoire would include a lot of Irish fiddle tunes, Reels, Hornpipes and Jigs along with the usual old-time Southern tunes. In this lp, the first devoted to the new style, we have the masters and creators of melodic clawhammer banjo reunited: Ken Perlman, Bob Carlin, Henry Sapoznik, Andy Cahan and one track by Dana Loomis. Ken Perlman is whithout a doubt the most important melodic clawhammer player here, not only for his amazing playing but also as a great teacher of the style. His instruction books and videos helped many players to extend the possibilities of clawhammer banjo playing. Bob Carlin is also a great player and teacher, but more oriented toward the traditional appalachian styles than Perlman. Henry Sapoznik was a major melodic clawhammer player in those days but he also studied classical banjo and initiated the Klezmer revival in New-York as well. Andy Cahan, like Carlin, is a folklorist and great player of the old-time Southern styles.
The tune selection on this lp is diverse and representative of the melodic style with an emphasis on Northern and Irish melodies. The guitar and piano back-up on many tracks is delicate and let the banjo be the lead instrument here.
Enjoy!
Track list:
1.Greenfields of America Andy Cahan
2.Trip to Sligo Ken Perlman
3.French Canadian Medley: St Anne's Reel/Gaspe Reel Henry Sapoznik
4.Picking up tea leaves Andy Cahan
5.Bonaparte crossing the Rocky mountains Bob Carlin
6.Green Willis Bob Carlin & Henry Sapoznik
7.Sligo Maid Ken Perlman
8.Flying Cloud Cotillion Bob Carlin
9.Snowflake Reel Andy Cahan
10.Speed the plough Henry Sapoznik
11.Battle of Aughrim Andy Cahan
12.Ships in the cloud/Folding down the sheets Bob Carlin
13.Off to California Henry Sapoznik
14.Coleraine Andy Cahan
15.Fiddle Head Reel/Dubuque Bob Carlin
16.Flowers of Edinburgh Ken Perlman
17.Irish Spring Dana Loomis
18.Staten Island Hornpipe Henry Sapoznik
19.Chief O'Neil's favorite Andy Cahan
Download here (Lp in MP3 tracks)
Publié par Gadaya à l'adresse 12:50 PM

Thanks for this gem! I really appreciate the wonderful music you are making available. Keep up the good work.

wow, never heard of this one, thank you!

this is great! thank you so much for making this stuff available.

Great - I loved this album when it first came out, and later I was able to promote some Ken Perlman gigs when he came to Scotland. Thanks for this absolute gem!

Lovely! I bought this LP together with my first banjo, some 35 years ago. Not the easiest LP to learn from, I must admit.

Neat stuff! I have this on LP but have been too lazy to convert to Mp3. Thanks! You know what I've been looking for? "Old Time Banjo in America" also on Kicking Mule. Someone needs to liberate that recording from the shackles of obscurity.

thanks for Melodic Clawhammer Banjo & booklet. someday i want to learn banjo so I'll put this away until then. can anyone recommend any other good books with audio?

I have also a suggestion of a great LP from the Kicking Mule label:
"Southern Clawhammer" with many great musicians including: Brad Leftwich (fiddle), David Winston (banjo), and Fred Cockerham on many solo numbers.

There was a tab book to that LP also, I think.

thank you for the record and the book! it will be very good to help me learn.