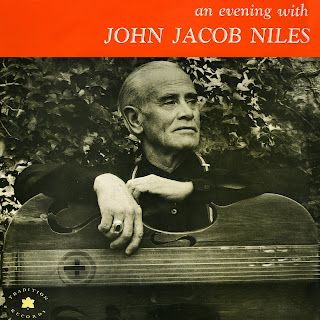 If you never heard the music of John Jacob Niles be prepared to meet a very personnal and eccentric singer, who devoted all his repertoire to the folk and traditionnal songs of the british isles and the United States. He sang Child ballads, carols and Appalachian folk songs like no one else, with his voice going from low to high all the time and living and acting the story of the songs like an opera singer... The other weird aspect is that on all his songs he would play a kind of big  dulcimer that adds to the strangeness of his renditions. In all, it can take a little time to appreciate but to my opinion he was one of the most intense and dramatic singer of all times and he should be better known. http://www.mediafire.com/?5zndqmtbmdl
Publié par Gadaya à l'adresse 3:21 AM

what the hell. not one comment
i got this like a year ago from u & its sooo damn good. got his christmas album recently too, wtf?anyway thanks so much for this friend.

thansk so much for making these albums available again. great effort on your part.