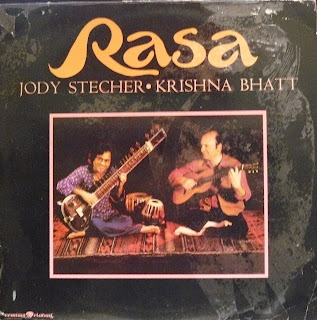 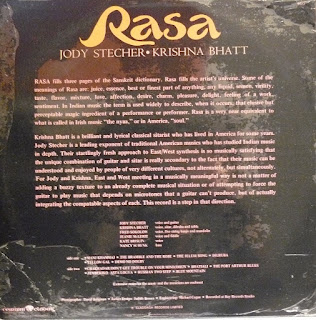 Ok, now it's time for a real gem, a unique record that never been reissued on cd and is hard to find on vynil also... It's a collaboration between one of my favorite american musician and singer, Jody Stecher, and the indian sitarist Krishna Bhatt. The fusion of indian and american music have already been tempted on record but it doesn't sound as natural and fun as on this album. Jody Stecher have been studying and playing a variety of roots music for years and always took the best, the essence of each traditions. On most of his records, he mostly displays his skills on songs and tunes in the american vein but he studied also the indian traditions deeply.
On Rasa, we have appalachian tunes, greek rembetiko, cajun song, russian-two step ,etc...played by two masters enjoying themselves with a bunch of friends.
Hope you like it...http://www.mediafire.com/file/tnwododtwmj/Rasa.zip
Publié par Gadaya à l'adresse 9:10 AM

You're my hero! I've been looking for this album for quite some time. Jody Stecher is a favorite of mine too. Thanks!

I'm glad i made someone happy. I hope the sound of this numerized lp is not too bad and reflect the subtility and sensibility of the music played...

This has to be my musical find of the year so far! Thanks so much for this.

Fantastic ! I remember the first time hearing this on irish Radio and then eventually tracking the album down after quite a long time. It was on the now defunct Claddagh Label here in Ireland -- I think it was on the Green Linnet label in the US -- does anyone know where it was recorded ?

I picked up a mint copy of this lp today and it did not have the original notes. I had never known about it or seen it previously.

Someone wanted to know where it was recorded. This recording was produced by Mike Cogan, who owns Bay Records here in the San Francisco / Bay Area. Mike used to be over in Alameda, CA, but I believe he is now somewhere in Oakland or Berkeley.

Most of the musicians are also local folks and Jody Stecher and Kate Brislin and the others, all perform frequently hereabouts.

Now to listen to it!

What an unbelievable sounding recording! Even with your excellent MP3 downloads, it shines!

I knew that Mike Cogan was a superb recording engineer, but this is fabulous!

Mike likes to use very basic mic technique and obviously knows how to handle groups like this in the studio, with little or no overdubbing, as far as I know.

The only other engineer I personally know who does this sort of thing a lot is Kavi Alexander, who operates his own label, "Waterlily Acoustics".

Check him out if you love both traditional Indian music and fusion stuff.

He won a Grammy a few years ago for his incredible recording "A Meeting by the River" with Ry Cooder and a fine ensemble of well known Indian musicians.

Thanks so much for this. I have been looking for this for about 10 years. Had it on cassette tape and lost it. When I first met my wife we played it alot driving along in our old VW camper - Bramble and the Rose was "our song". What a recording!!!

I heard this on WPRB in Princeton NJ. Searched long for the LP, never found it. Wrote to the DJ, he told me that the warehouse at Rooster records burned and that all copies were destroyed. He made me a copy of his LP on cassette, but what a dream to find it here digitized! Thanks so much!

Back when this album came out, I worked at a company that imported Irish records. This one was included in a box of free samples that Claddagh sent us. As soon as I put it on the turntable I was hooked, and I pretty much wore the record out. I've thought of it often since then, but never thought I'd hear it again, so you can imagine my joy at finding it here. You've brought back some fabulous memories.

Thank You - my next door neighbour nearly wet himself he was so happy.