You can tell the world about this 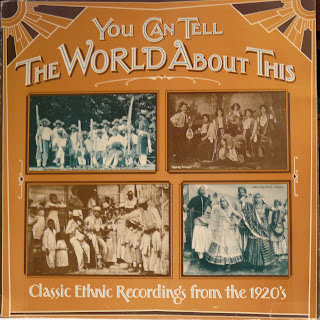 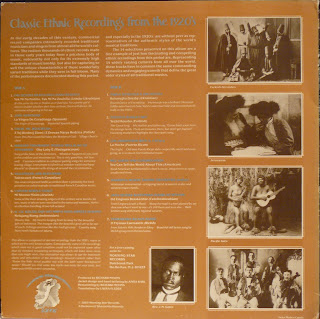 Today i'd like to post a rare record, from a label called Morning Star Records, which was operated by Richard Nevins, also founder of Shanachie Records. Nevins is also a record collector and operated the wonderful reissue compilations of vintage recordings on Yazoo. The Morning Star label was created in the 80's and released only a few records. I'm lucky to have found one on ebay wich is called "You can tell the world about this" , a wonderful compilation of ethnic recordings from the 20's and 30's. Ten years later Yazoo Records would release on cd five volumes of vintage ethnic recordings selected by Pat Conte called "The secret museum of mankind". A few of the tracks on the lp would reappear on the cds but the rest is another bunch of unique 78rpm records from around the world.
http://www.mediafire.com/file/nm1yjnzn43y/You can tell the world about this.zip
Publié par Gadaya à l'adresse 8:33 AM

Looks like a great bolg
none of your links work
it just goes to a like that says
this blog can not be found
can you help ??

Hi jugman, to me the links seems to works. I click on it and it leads to mediafire where i upload my files.i'll check with others to see what happens...

No problems here. I'm grabbing the Sam Chatmon album right now. Welcome to the pack gadaya. Some killer posts by you already. Thanks and keep it up. I'll put a link to your blog over at Broke Down Engine.

I typed the address straight in to the address bar and it went to Mediafire.
I don't know what's up with the link and my computer.
But I got there

morning star was founded in the 70s and shanachie was founded by Rich Nevins and Dan Collins. Rich was a speacialist of old time fiddle and Dan was speacialist of trad. irish fiddle music.Together they formed shanachie from an apt. in the bronx, NY. where i grew up. Nick Perls founder of yazoo , passed on his co. to him in his last years for a humble price i believe.