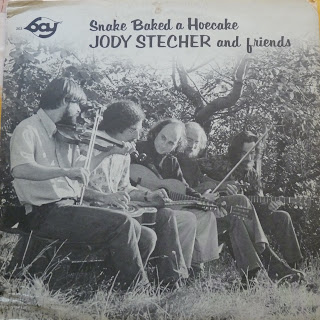 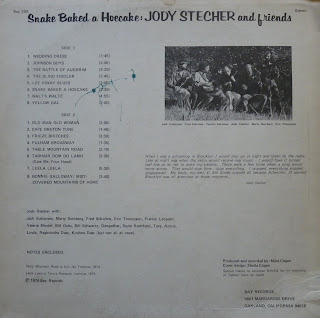 "Snake baked a hoecake" is Jody Stecher's first lp, issued by Bay Records in 1974. In my previous Jody Stecher's post ("Rasa" with sitarist Krisna Bhatt") i already told how great musician he is and how he manages to pick up the best from every musical traditions he goes into. On this album, there's a mix of american and irish/celtic tunes and a awesome song with a indian flavor (Leela,leela...every time i listen to it, it makes me want to sing and dance and go live in an ashram). Jody is playing with a bunch of friends and the whole atmosphere of the lp reflects the good time they have playing together. On his next album, "Going up on the mountain" (one of my favorite lp of all time), he would continue in a more bluegrass vein, with more singing than on this one. There would be also the first duets with Kate Brislin, her wife and musical partner with whom he made some superb records ever since.
Acoustic disc, the record company run by David Grisman have reedited in cd "Going up on the mountain" a few years ago and half of the tracks of "Snake Baked a Hoecake" were on it...
Now you can listen to the whole record, enjoy!
Download here (zip file of vinyl rip cut in mp3 tracks+photos of the liner notes and covers)
Publié par Gadaya à l'adresse 2:24 AM

oh, Gadaya, you have made my day once again! I think Jody Stecher is my favorite musician. And this is one of the few albums of his I didn't have. Thank you, bless you, may the music be with you!

I'm going to do a post on Jody soon, a mix-cd that I put together. stay tuned

oh, and i TOTALLY know what you mean about Leela Leela. If I could count the number of times i've cried or jumped around or smiled uncontrollably because of that song. or the number of cd's i've put it on and given to people i love..

you know, of course, that 'Leela' is a sanscrit word meaning 'The Dance of Life' right?

i have a friend living in an ashram in Crestone, Colorado, USA. her name is Lela. She pretty much embodies this song.

Absolutely great site, thanks so much for all the hard work, invaluable stuff.