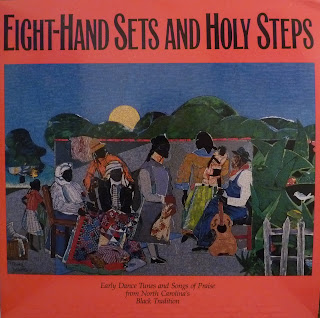 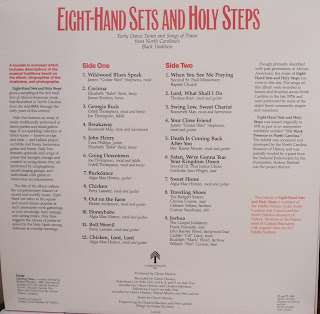 The lp i'm introducing today is a beautiful document of black folk music from the North Carolina region. It's a sampling of the rich and diverse music blacks were playing around the middle 1800's through the early years of the 20th century. It was recorded in North Carolina in the 1970's, at a time were you could still here this kind of music among older black musicians or by their children who kept the tradition alive. The first side of the lp is devoted to dance tunes, also called rags and reels, that were played at social gatherings with guitar, banjos, fiddle, harmonica, bones etc... The second side features songs of praise and spirituals played either by groups or individuals. Some of the musicians are well-known by fans of pre-Blues and Black String-band music ( The duets of Joe and Odell Thompson on fiddle and banjo for example).
In addition to the digitalized version of the lp cut in MP3 tracks, i added a pdf document of the 25-page booklet that goes with the lp (including photographs, notes and lyrics)
ENJOY!
DOWNLOAD HERE
Publié par Gadaya à l'adresse 9:00 AM

bless you. these are indeed precious.

Man! Great Stuff. Thanks for the opportunity to listen.

So kind of you. Deep thanks!

truly wonderful album - makes you wonder what else is out there gathering dust. if anyone has similar albums I beg you to post

That's a great record. Thanks for scanning the whole book, too.

Glad you all like the Delta Sisters. If you want to get the CD, with 5 new tracks, contact www.bayouseco.com
Gadaya has some great stuff on here. Cheers, Jeanie McLerie - a Delta Sister

This is banishing my winter blues. The perfect antidote for most current commercial music. Thanks!

Thanks so much for posting this album. I will be listening to it (and playing along with my banjo:) for a long time.

Fantastic post! However, the link seems to be broken. Can you repost? Thanks!

Hi Scott, it works on my computer... Don't know what happens for you...

what an amazing record! ear opening! thank you!