Norman S. Edmonds-"Train on the island" 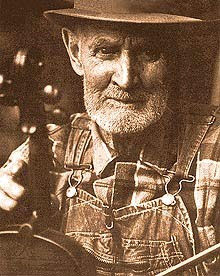 Here's an out-of-print lp issued by Davis Unlimited of Old-Time fiddler Norman S. Edmonds. People who love Harry Smith 's Anthology of American Folk Music (see my blog "The Old Weird America) may know and love already Edmonds's fiddling from the track "Train on the island", a great fiddle and banjo driving piece of music. Born in 1889 in Virginia, Edmonds recorded only a ccouple of tracks in the 1920's with banjo player J.P Nestor, but appeared in many fiddler's conventions in Virginia and North Carolina, often with his band called The Old-timers. He was a genuine old-time fiddler, playing in the archaic style of the mountains and with driving rhythm, the old traditional dance tunes.
-You can hear other performances from Edmonds on a cd released by the Field Recorder' Collective label.
-Go to the Old-time fiddlers Hall of fame page to read a more extensive biography of Edmonds.
Track list:
01-Walking in the parlor
02-Black-eyed Susie
03-Train on the island
04-Breaking up Christmas
05-Lucy Neil
06-Hawks and Eagles
07-Cricket on the earth
08-Ships in the clouds
09-Angeline the Baker
10-Pretty little girl
11-Old Cotton-eyed Joe
12-Chinquapin Hunting
Download here (I didn't took pictures of the lp cover this time because the lp folder I have is totally black, whitout any informations, except for the tracks's name)
Publié par Gadaya à l'adresse 12:14 PM

Awesome - Glad you're back - thanks for the upload!

Hello. Thanks so much for putting this up. I am a big fan of Uncle Norm.

One thing...The ZIP file you posted requires a password.

Hi Gil, i don't understand why you need a password. Some have already download this without a problem it seems. If others have the same issue i'll see what i can do...

This was NOT on Old Homestead, or if it was, the original release was on the Davis Unlimited label: DU 33002: Norman Edmonds, Train On The Island.

Would you like a copy of a Davis Unlimited discography? About 45 LPs were released, some very interesting.
Frank Dalton

Great upload of a great LP Gadaya :-)
I borrowed this LP from a friend some years ago, and digitized to MP3s. Unfortunately I didn't scan the cover so I could share it with you.
But the strange thing is that my version had 14 tracks instead of the 12 on yours?
Mine included "Sweet Little Julie" and "Barlow Knife" as well as the ones you have posted.
Send me a mail if you want to add these to the upload.

Thank you very much. i love you blog.

You're right... The lp was on Davis Unlimited... i just had the other label name on my mind when i wrote this...

ahh, great news indeed! and it looks like a great albums as well. thanks again, gadaya!

Some other posted that the "Explorer extracting utility" in Windows demands a password for these "Zip" files. Try using the free trial version of Winzip instead, it solved the "password issue" for me.

I had a different problem than Gil with this file. I tried downloading it several times, but this zip file refuse to extract, and I have tested ExtractNow, Windows Explorer and "WinZip". I don't know what you and others use, but Winzip states that all files have "invalid file names".

Others seems to have more luck, according to the comments, but it's a quite strange problem.

we fiddlers are in your debt! thanks

thanks so very much for your posting.. look forward to your inclinations...

Thanks for this post, I managed to extract these with WinRar, I don't know what programs the other used but Winzip wouldn't work and not ExtractNow and not the integrated "Explorer". Either way Winrar reported 54 problems/errors.

As Tobias said, the tracks 3 and 4 are "missing" from your upload, that is "Barlow Knife" and "Sweet Julie". Here is the info link:

For those interested it can be found on CD if it hasn't gone out-of-print again.

Here is another link for their new releases on Spring Fed Records: