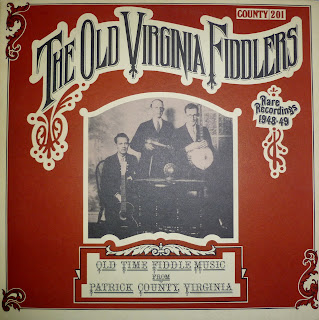 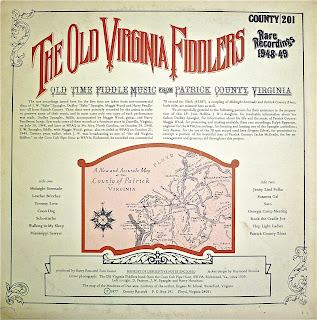 Here's an out-of-print lp from County Records issued in 1977. The old Virginia Fiddlers were John Watts "Babe" Spangler and his cousin Dudley Spangler from Meadows of Dan, Virginia. The two learned their fiddling style from John Watts' father, Wallace Spangler, a reputed old-time fiddler from the region. The numbers on these lp were private recordings made by the artists to preserve their music except two tracks (Midnight Serenade and Patrick County Blues) that were issued on a 78rpm records. The sound is a bit scratchy but this is great fiddle music. Enjoy!
-Be sure to read the booklet for more informations on the players and the tunes (Click here for the PDF file)
-Click here to download
Publié par Gadaya à l'adresse 8:53 AM

This is wonderful - thanks for this record, which I've never come across before.

great stuff--but is the recording a little fast? (listen to the spoken intro to "Rock the Cradle Joe"

I don't think the record is too fast, even if the voice in the intro seems strange, the music sound allright to me...

Really great playing and a great discovery! Great feeling on these tunes.

Hi friend, I just wanted to finally say Thank You for all the wonderful music and informational digging you do, and for the aesthetic benefits I have reaped thereof!